Background: Dysregulation of microRNAs (miRNAs) figures prominently in the radio- sensitivity of non-small cell lung cancer (NSCLC). MiR-129-5p can block the development of a variety of tumors. However, whether miR-129-5p modulates radio-sensitivity of NSCLC cells remains unknown.

Objective: This study was aimed to explore the role and the underlying mechanism of miR-129-5p in the radiosensitivity of NSCLC.

Results: In A549-R and H1299-R cells, compared with the wild-type cell lines, miR-129-5p expression was remarkably reduced while SOX4 and RUNX1 expressions were increased. The transfection of miR-129-5p into NSCLC cell lines markedly induced cell apoptosis, DNA injury, cell cycle arrest, and inhibited cell proliferation and colony formation. RUNX1 and SOX4 were validated as target genes of miR-129-5p, and the restoration of RUNX1 or SOX4 could counteract the influence of miR-129-5p on A549-R cells. 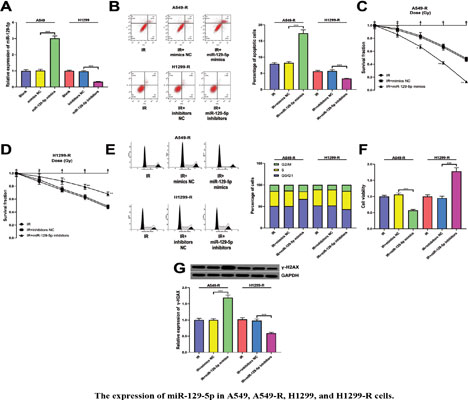